Plastics Company: About Us

In 1998, Mr. Grimes and his then business partner decided to bring in an additional principal to the business during the period of explosive growth, the new partner would be Jim Cravens, a plastics rotational molding associate of Mr. Grimes' past. In 2000, Granger's new Middletown, Ohio location would require expansion, as Granger's sales growth encompassed customers literally all over the world.

In 2002, after nearly 40+ years of dedication to the rotational molding industry, John Grimes would elect to retire, leaving Granger Plastics to the direction of Jim Cravens. In October of 2017, Cravens became the sole owner, President and CEO of Granger Plastics Company.

Granger Plastics Company has worked with a number of industry leaders to perform a number of material conversions, where one product was produced in metals or fiberglass and found benefits and cost savings by converting their products to rotationally molded plastics. Numerous conversions have originated from OEMs who experience an increase in their parts quality and durability by converting from either a metal based material such as stainless steel or aluminum to a polymer based materials such as LLDPE (Linear Low Density Polyethylene.). Granger also regularly converts thermoset materials such as fiberglass, polyesters and more for the roto-molding process.

Granger Plastics Company has recently garnered international media attention after converting an extremely large fiberglass product to a much more durable, rotationally molded plastic product. The conversion from a fiberglass product to a plastic product has offered a tremendous increase in maintenance savings for one of the world's leaders in luxury automobile transportation. 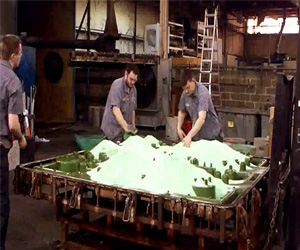